How to Have a Strong, Dominant and Powerful Will

"“The student who has developed will-power can, without doubt, influence his fellow beings to do that which he wills them to do. It is this unseen element that often causes men and women to do things in business, social and domestic life that their ordinary common sense and reason would reject; yet, under the magnetic personality of another they do it without thought, impressed that their acts are the outcome of their own natural inclinations”.” - L.W. Lawrence (Occultist)
In the beginning of my own magnetic training, Fabricio was constantly talking to me about the Will, yet, I only had a vague idea of what it was. At that time, I had already read some of New Thought books and thought I knew at least a bit about the training of the Will (oh sweet innocence!). One time, as he was describing the Will, I asked him:

“So I train it by exercises like counting a box of matches and avoiding addictions, right?”

“No, not at all! Especially not at this stage.” – answered Fabricio – “A strong Will is the most powerful skill you can develop in your whole magnetism training. It will make everything you do 100 times more powerful. But if you do it wrong, you are only wasting your time!”

“If being bored by some activity like counting matches was a good Will training, you would already have a great and powerful Will since you told me how bored you were at school. But you don’t have a strong Will right?”

“Good answer. Now let’s start your Will training, which is everything but boring!”. And he proceeded with teaching me what you’re about to learn.

As he was teaching me, I was blown away by the detailed process that’s inside the simple act of “willing” something. More importantly, I was impressed by the profound awareness of those who actually discovered this!

Once I understood the ramifications and implifications of the Will, everything changed. It was one of those Matrix moments where a whole new world opened up before me.

I understood that you can use the Will for much more than simply resist eating cookies or force yourself to exercise everyday. It’s a connection to your true self and to your true purpose at the same time that exponentially increases your power in life.

William Walker Atkinson said: “Nothing is impossible to the man who can Will — providing he can Will sufficiently strong”. That’s exactly right! The Will boosts your ability to achieve, influence, act in all situations in your life. It’s like you take a shot of motivation, strength and power.

And now I want to continue the chain of transmission of this valuable knowledge by passing it on to you.

This was quite a hard training to create as I didn’t want to miss the important subtleties behind the Will that I was taught – and there are many! I created this training to become the flagship course on all Will trainings. Everything else builds on top of this. It’s the foundational stone. And that’s a big responsability considering the fundamental importance of the Will in your life, magnetism and influence ability.

“Will Mastery” Is The Most Comprehensive Will Training Program You Can Find Anywhere. It’s Most Efficient Path For Increasing Your Will To Unparalleled Levels Of Power In Your Life!
Here are just some of the benefits you’ll get with Will Mastery: 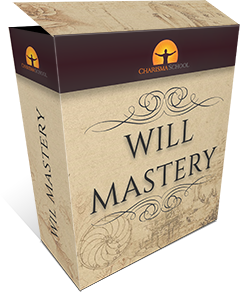 Who is this for?

This is for all those students who want to develop their Will to very high levels and are not afraid of awareness and introspective type of exercises. The Will is not developed by brute force, but instead by going deep inside  and understand how the Will is represented inside of you, and all of its stages, traits and characteristics.

Who is this NOT for?

Don’t start this training if you are diagnosed with any severe mental health disorder. Doing this training without supervision can be hazardous on this situation. If you decide to do it anyway, make sure you are supervised by a mental health professional.

What are the pre-requisites?

The only pre-requisite is the “10 Steps to Inner Power” training. This course follows the same structure and it’s a sequel in terms of many of the exercises and skills taught inside, so it’s heavily recommended that you are familiar with its exercises and skills before starting “Will Mastery”.

You don’t need a mastery over the concepts of the “10 Steps of Inner Power” but you do need familiarity with its exercises and this background knowledge.

How long does it take?

The course has 10 steps; each will take at least a week to finish. So expect, at the very least, 10 weeks on an optimistic scenario. Most students take longer than that.

What is the Will has to do with Magnetism and Charisma?

The Will is the engine behind Magnetism and Charisma. It’s right there underneath everything. Once you truly understand it, train it and develop it, your magnetism has no choice but to improve.

It’s not a coincidence that every single book on charisma and magnetism (both modern and ancient) have a chapter on the Will. It’s your very center of power. The source of your magnetism.

What's the difference between the "10 Steps to Inner Power" and the "Will Mastery"?

The “10 Steps to Inner Power” serves as an introduction to the Will, but you don’t go in depth into it. You develop different aspects of Inner Power, where the Will plays a fundamental role. On “Will Mastery” you ONLY focus on the Will.

There’s an obvious difference between Inner Power and Will. With Inner Power you develop several high level skills akin to driving a car. It’s like you are learning how to drive; while with the Will you are working under the hood. You are working on its engine and its intricate details. When you do that, you are able to tweak it in such a precise way that your driving skills skyrocket.

Is this the same thing as the Will State bonus training?

This will go beyond the Will State bonus training.

Is this about doing boring exercises?

Not at all. In fact if you are bored doing ANY of the exercises on this training, it means you aren’t doing it right and you aren’t training your Will. Only your ability to be bored.

Don’t expect this training to be filled with exercises like staying still for 20 minutes or counting matches. It’s NOT that kind of training. It’s a training where you go in depth into your own mind, body and energy and observe the Will in its many different traits, so that you can develop all of them to very high levels.

In other words, it’s not brute-force; it’s deep fine tuning.

How will it start?

Once you purchase the training, you’ll immediately be guided to the Charisma School Training Academy where the first step is ready for you to watch and train. So you can start the training as soon as you purchase it. The other steps will be unlocked as you move through the training.

Can I share the course with my friend for him to try?

No. As with all Charisma School trainings, the true value is on your personal training path. Doing this training by yourself – without the help of a qualified teacher – is simply not possible. Most likely, you will be stuck on several steps.

Does this training have any support?

Yes, I’ll personally be available by email to answer any questions you might have. This is a crucial aspect of the training.

Due to the experiential nature of this training, it will very hard to complete it without the support of a qualified instructor. The system can sometimes have to be adjusted to fit someone’s needs and there’s where I come in.

I’ll work with you until you reach the end of the training, whether you take 1 month or 1 year finishing the course, I’ll be there to guide you along. It’s about YOUR result, not another useless product on your hard drive.

HOW TO ENROLL IN “WILL MASTERY”?

This course is only available to Charisma School students who own 10 Steps to Inner Power. It’s NOT a beginners course and, hence, is not suitable for those with no experience with our methods.

Your investment in this course is only $177. Once your enrollment is successfully processed, you’ll have immediate access to the Member’s Area so you can start your course straight away! For your safety, the payment is done by Paypal. Paypal is a reputable online banking solution that handles all the credit card information by a safe and secure processing page.

There are no recurring fees, no additional fees and no hidden fees. Once you buy it, the course is yours for life!

The training of the Will is now more relevant and needed than it was ever before in the history of mankind. Now there’s a whole army of companies and apps trying to steal your attention and your own Will from you, forcing you to do several behaviors in their own self-interest.

I’m going to be 100% honest with you. Will training is hard, particularly when you start training it. It demands a strong effort and attention from your part, which is definitely harder than simply laying back and watching netflix.

But then again, what gives you the most odds of succeeding in life and achieving what you truly want: Watching netflix, browsing facebook OR having full control over your mind, body and energy – which is what the Will provides you?

For me the answer is clear. I hope that for you it is as well.