Raise your mental trolley-pole and touch the live wire of Will!

“History is filled with examples of men who have developed the use of the Will. We say “developed the use” rather than “developed Will,” for man does not develop his Will – his Will is always there ready for use – a man develops his ability to use the Will – perfects himself in its use. We have frequently used the following illustration, and have not been able to improve upon it: Man is like a trolley car, with the upraised trolley-pole of his mind reaching out to the live wire of Will.

Along that wire is flowing the current of Will Power, which it “taps” and draws down into his mind, and by which he is able to move, and act and manifest power.

But the power is always in the Wire, and his “developing” consists in the ability to raise the pole to the Wire, and thus “tap into” its energy. If you will carry this idea in your mind, you will be able to apply this truth more easily in your everyday life.

A great promoter of the steel-pen, and electroplating industries, possesses this quality to a marked degree. It has been said of him that: “He had, to begin with, a strong, powerful, almost irresistible Will; and whoever and whatever he opposed, he surely conquered in the end.”

Buxton said: “The longer I live, the more certain I am that the great difference between men, between the feeble and the powerful, the great and the insignificant, is Energy – Invincible Determination – a purpose once fixed, and the Victory or Death. That quality will do anything that can be done in this world – and no talents, no circumstances, no opportunities, will make a two-legged creature a man without it.

In this last quotation and the one preceding it, the idea of Persistence and Determination is identified closely with that of Will. And they are closely identified, the idea being that the Will should be held close, fast, and steadily against the task to be accomplished, just as the steel chisel is held firmly up against the object on the lathe, until its work is accomplished.

It is not the mere Determination or Persistency that does the work – these would be of no avail unless the Will were there to do the cutting and shaping. But then again, there is a double-aspect of Will here – the Will in one phase does the work, while in another it forces the mind to hold it up against the task.

So, in a sense the Will is the power back of Determination and persistency, as well as the force doing the work – the cutting-edge of the chisel, as well as the firm hand that holds it to its work.

So raise that mental trolley-pole, and touch the live wire of Will”

I want you to really understand this concept so, using the same analogy Atkinson used, notice the photo: 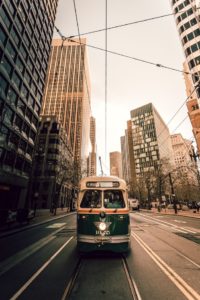 You are not creating it, you are connecting with what you already have by “raising your pole”.

That’s the work we do in the Will Mastery course!